Special Education Foundation is proud to announce five 2020 recipients of the John Cary Scholarship. The scholarship, established in 2016, honors the late superintendent of Special School District of St. Louis County (SSD). We regret that we cannot honor these students in person due to the COVID-19 epidemic, but we are proud to share with you some of their accomplishments. 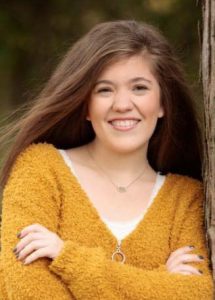 Caroline Bellido has overcome personal challenges as well as those related to her deafness. She is an adverturous young woman who loves travel and learning about other cultures. She took AP Art History, then traveled to Europe and was fortunate to see many of the pieces of art firsthand. She also visited Costa Rica during her sophomore year on a biology class study tour. Her chaperone describes some of her experiences: “One night she accompanied me on a hike across a VERY scary suspension bridge over a turbulent rainforest river at midnight! She even conquered her fear and removed her cochlear implant to go whitewater rafting. She sat behind me and followed what I was doing. Caroline is generous of heart, hardworking, and brave, and she is willing to dive in and take a risk even if it scares her.”

Caroline plans to study interior design at RIT. She says, “Being deaf in a hearing world takes a lot of patience, time, understanding and persistence. I not only use these skills to help me hear and communicate, but to do my homework, take a test, and even learn a new language or memorize the lyrics to my new favorite song. If I get worried or stressed in college, I know I will always be able to lean on these basic skills. Being deaf in a hearing world is not easy, but it has prepared me for anything college, and even life afterwards, could throw at me.”

The Foundation is proud that Caroline is a member of the 2020 class of the Fred Saigh Leadership Program. She is president of the American Sign Language club and completed a year of cadet teaching of ASL.

Her SSD teacher, Zachary Jodlowski SSD Teacher of the Deaf and Hard of Hearing, says, “Caroline is a wonderful student whose motivation for learning and growth in the areas of self-advocacy and self-acceptance will serve her well in her future.”

Connor Elliott is a successful student by any gauge, in spite of being diagnosed with autism, depression and anxiety. Tia Wilson, his SSD social worker, describes his journey. When she first met Connor as a freshman, “… his days often included intense crying, hair pulling and what was perceived as arguing with teachers.” She says he struggled to accept anything less than perfection from himself. Through counseling he learned to apply coping strategies and to accept himself and a grade that wasn’t 100 percent. As a senior he manages his emotions on his own. And his SSD teacher Maria DeProspero says, “Connor participates in special education classes due to his autism, the stress he places on himself to be successful, and his struggles with social interactions. Connor has made huge strides in this capacity as he manages his stress level and has become more comfortable in social settings.”

Tia believes that Connor exemplifies the characteristics the late SSD Superintendent John Cary admired most: resiliency, courage and determination. The story of how he achieved the rank of Eagle Scout illustrates these traits. Connor loved scouting, which he began in fourth grade. However before long he was bullied by another boy. It became so bad that he left the troop in sixth grade. But he missed the friendships, camping, discipline and education, and he worked up the courage to rejoin the troop in eighth grade. At that point, he was behind everyone else his age in rank. He had only four years to achieve his goal: Eagle School. He earned all the required merit badges, accumulated enough community service hours, held a leadership position and completed his Eagle Scout project. Connor says it was a real challenge and he didn’t always think he would succeed. But he persevered and achieved the rank of Eagle Scout only a couple of months before the deadline of turning 18.

Connor was also recommended for black belt in tae kwon do, and he received the Glory of Missouri Award for the virtue of truth. He volunteered at Circle of Concern food pantry and has his own lawn care business. He is committed to learning about and protecting animals and hopes to become a veterinarian. And oh, by the way, he has a 4.0 GPA.

Alex Love’s SSD case manager Kelly Brown describes him as a scholar-athlete. That is true: he is in National Honor Society and on the varsity football and track and field teams. He was recognized with the St. Louis Suburban All-Conference Sportsmanship Award

Alex overcame personal issues to change his high school trajectory. His grades went from C’s and D’s to honor roll level because of his increased self esteem and his dedication to challenging himself. His junior year, his football coach told him to get stronger if he wanted to make varsity the next year. He did the work to increase his physical performance, including planning his meals and his sleep schedule and keeping hydrated. And made the team.

Here’s what two of his teachers have to say:

“When I think about young people I have encountered who will truly make a difference in this world, Alex is one of the first to come to mind. Not only does he work hard to achieve his goals in academics and athletics, more importantly, he is a kind soul who sees the good in all people. I have watched him mature into an outstanding leader. He strives to demonstrate excellence in all he does. When faced with an obstacle that tries to stand in his way, he pushes through it with strength and dignity.”
Paula Ake, Professional School Counselor, Marquette High School

“Although life presented challenges, Alex took each challenge in stride. Academically, he embraced the learning strategies taught to him and helped to teach others these strategies as a cadet teacher in his senior year. Alex is recognized as a scholar-athlete and demonstrates leadership qualities as a team player in both football and track. Alex’s football coaches share he is the first player to show up the last player to leave even when faced with an injury.”
Kelly Ann Brown, Special School District Case Manager

Ana Roja was born in Ecuador and has profound bi-lateral hearing loss. She moved to St. Louis at 5 years old and went to St. Joseph Institute for the Deaf until transferring to West Middle School for sixth grade.

Ana was interviewed by a radio station in Loja, Ecuador, to share the benefits that hearing impaired people have in St. Louis through sharing her personal experiences and information about technical advances. She volunteered at a baseball camp for deaf children and for Special Olympics.

She says she relies more on her other senses and is a visual person. She is enjoying her Digital Design class and would like to study graphic design at RIT. She says, “The use of visual communication is a great part of being a graphic designer. For me, it is very encouraging to present a message through the use of different resources and media.”

Her SSD teacher, Zachary Jodlowski SSD Teacher of the Deaf and Hard of Hearing, says she has blossomed in her self-advocacy and persistence. “Even when she encounters difficulties or disappointments, Ana demonstrates great resiliency by pushing forward, and continuing to work hard and remains a bright personality. She makes our job much more enjoyable by remaining positive, hard-working, and being herself.”

Her speech pathologist also has praise for her. “Ana is a hard-working, empathetic, creative and kind individual. I began working with Ana to provide her services related to her profound bilateral hearing loss, for which she wears bilateral cochlear implants. In our sessions together, she has become an inquisitive learner and detailed story-teller. She loves to pull experiences from her academic and social world into her multi-layered narratives. She is always eager to apply new vocabulary, concepts, and knowledge into to her self-expression. In addition, her consistent family support and rich cultural experiences have played a strong part in setting the foundation for her creativity, open-mindedness, consistent academic effort, and heartfelt connection to her community.”
Andrea Gregg, M.S., CCC-SLP, Pediatric Speech/Language Pathologist Cochlear Implant Team , St. Louis Children’s Hospital 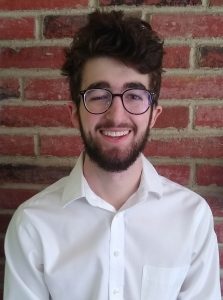 Max Shengelia knows what he wants and how to achieve it. In his sophomore year of high school, he devised a plan to graduate in three years and worked with his parents and school staff to set it in action. Between summer and online classes and some credits he earned in middle school, he will graduate this spring. And his GPA is above 4.0 with a workload of honors and AP classes.

Parkway West English teacher Casey Holland says, “He did all of his work with his own creative tilt. When he received a task, he liked to take his own angle on it and did so with a positive attitude and a certain excitement that was great to see in a student.”

Max is a 2019 graduate of SEF’s Fred Saigh Leadership Program and received a Rosemary Zander Self Esteem Award in 2013. He has served as president of Deaf Teen Club for three years and frequently volunteers at Deaf Inc.

SSD Teacher of the Deaf and Hard of Hearing Zachary Jodlowski says, “As his self-awareness of his identity and community grew, he continued to be a model for self-advocacy. He would regularly touch base with me regarding any concerns with accommodations or supports in the general education setting. For instance, during his sophomore year, he struggled with note taking in his AP World History class. He independently recognized the issue, talked it through with me, then tried some alternative strategies before researching and proposing C-Print services as an alternative.”

Max looks forward to a community of like-minded deaf individuals at RIT, where he has been accepted into the web and mobile computing program. He says, “This degree, despite the steep price, promises good returns. Not only are programming jobs on the rise – along with their salaries – they allow for a rich working environment since coding teams must collaborate on projects and adjust to the ever changing world of code. Along with this, coding jobs can be found with a variety of schedules and workloads, allowing me to balance my future work and home lives, resulting in a more fulfilling lifestyle.” Don’t bet against him!

We also awarded two Christopher Davis Scholarships to Alexis Holt and Joseph Kipper, both of Ritenour High School. The scholarship, sponsored by Ronald and Marsha Davis, is given as a tribute to their son, Christopher, who was fatally injured in a car accident. Christopher received services for his learning disability from Special School District.